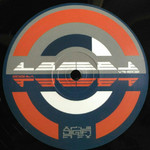 This is a big selection of tracks that have been released almost 20 years ago. Les Boucles Etranges took the tracks they submitted to the first production of U238 records, next to this the b-side wears the best track of k21 his solo EP, Graveyard 02 called : New Religion, this longer version is really nice and monotone, big chance we will hear it sometimes in the upcoming festival season.